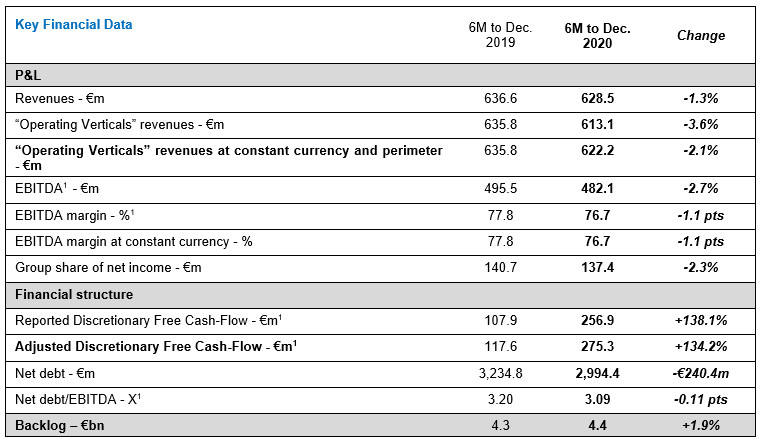 Commenting on the First Half, Rodolphe Belmer Chief Executive Officer of Eutelsat Communications, said: “Eutelsat has produced a solid First Half performance with Operating Verticals revenues down by 2%, reflecting our resilience in the Covid-19 impacted context, and with an EBITDA margin at 76.7%, despite the costs associated with Broadband ramp-up. Free-cash flow generation at the half year stage already amply covers the dividend paid in November. The past six months have been dynamic from a commercial point of view with the award of a further EGNOS payload to fly on EUTELSAT HOTBIRD 13G, a major wholesale agreement with Telecom Italia for the Italian capacity on EUTELSAT KONNECT and KONNECT VHTS following a similar agreement with Orange in France, and several renewal and new deals in Sub-Saharan African broadcast. From an operational point of view, we have made significant headway on our Broadband strategy with the entry into service of EUTELSAT KONNECT and the reorganization of our retail arm, where the integration of Bigblu Broadband is progressing smoothly. In view of this solid start to the year, we are in a position to absorb the negative perimeter effect linked to Broadband transactions and to raise the low end of our FY 21 revenue objective.”

Notes: This press release contains figures from the consolidated half-year accounts prepared under IFRS and subject to a limited review by the Auditors. They were reviewed by the Audit Committee on 10 February 2021 and approved by the Board of Directors on 11 February 2021. EBITDA, EBITDA margin, Net debt / EBITDA ratio, Cash Capex, Discretionary Free Cash-Flow and Adjusted Discretionary Free Cash-Flow are considered Alternative Performance Indicators. Their definition and calculation are in Appendix 3 of this document.

Founded in 1977, Eutelsat Communications is one of the world's leading satellite operators. With a global fleet of satellites and associated ground infrastructure, Eutelsat enables clients across Video, Data, Government, Fixed and Mobile Broadband markets to communicate effectively to their customers, irrespective of their location. Over 6 600 television channels operated by leading media groups are broadcast by Eutelsat to one billion viewers equipped for DTH reception or connected to terrestrial networks. Headquartered in Paris, with offices and teleports around the globe, Eutelsat assembles 1,200 men and women from 50 countries who are dedicated to delivering the highest quality of service.