Paris, 9 January 2015 — Eutelsat Communications (NYSE Euronext Paris: ETL) today revealed headline figures of research[1] on the number of homes receiving channels broadcast by eight of its flagship television neighbourhoods serving Europe, North Africa and the Middle East[2]. A total of 274 million homes are now either equipped for Direct-to-Home (DTH) reception or connected to a cable or IP network offering channels broadcast by a Eutelsat satellite, up from 207 million in 2010 (+32%). Seventy per cent of the 393 million TV homes in the footprint analysed today watch channels brought to them by a Eutelsat satellite.

All eight neighbourhoods continue to experience audience growth. Eutelsat’s established HOT BIRD neighbourhood remains in pole position, standing at 138 million DTH, cable and IP homes, up from 122 million in 2010. The fastest growth was recorded for EUTELSAT 9A whose audience, principally concentrated in Western Europe, has risen from five million to 14 million, attracting nine million new cable and DTH homes since 2010.

DTH remains the leading reception mode within the combined audience of the Eutelsat neighbourhoods measured, accounting for 160 million homes, up from 111 million in 2010 (+44%) and increasing its market share to 58% from 53%. This growth in particular reflects strong demand for channels broadcasting from two neighbourhoods:

The total audience of the HOT BIRD satellites in Western Europe has continued to expand, reaching 67 million homes in 2014, up from 62 million in 2010.

Michel Azibert, Eutelsat’s Chief Commercial and Development Officer, commented: “ This extensive research confirms that satellite remains the backbone of digital broadcasting infrastructure, delivering channels to homes on a DTH basis and enabling operators of cable and IP networks to enrich and diversify their line-up. Eutelsat has invested in high-performance satellites to address both longstanding and developing television regions and we will continue to leverage our experience in order to offer enhanced value to our customer base, develop new video markets, notably in Latin America and Asia, and support the expansion of this thriving industry.” 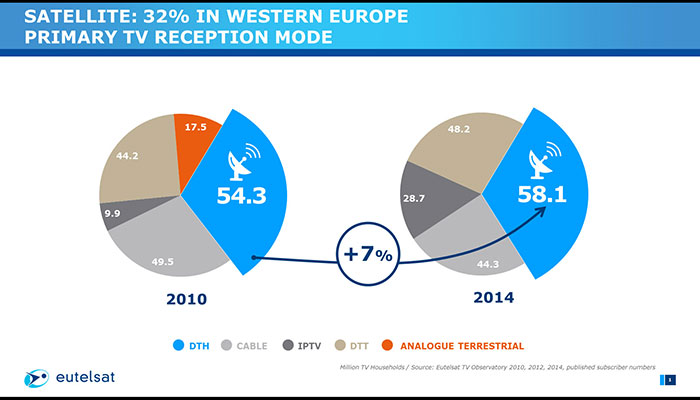 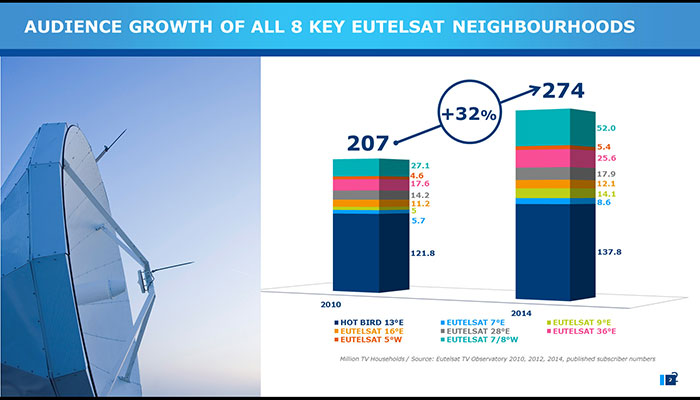 [1] Commissioned from TNS Sofres and IPSOS

Established in 1977, Eutelsat Communications (Euronext Paris: ETL, ISIN code: FR0010221234) is one of the world's leading and most experienced operators of communications satellites. The company provides capacity on 35 satellites to clients that include broadcasters and broadcasting associations, pay-TV operators, video, data and Internet service providers, enterprises and government agencies.