Using Sigfox's very low-speed network, the Sigfox Foundation has designed and implemented a remote tracking solution for rhinos that uses GPS sensors fitted in the horn of each animal to send positioning data to a secure on-line platform via Eutelsat satellite resources. Three times a day, wardens, vets and specialists in game parks can access readouts of the movements of the animals. This precise data allows them to improve protection against poaching and understanding of an endangered species. With the help of Eutelsat’s satellite resources the Sigfox Foundation aims to fit 3,000 rhinos over a three-year period to track movements.

Prior to officialising the partnership, Eutelsat and Sigfox Foundation have collaborated since November 2016 on an initial operation in southern Africa connecting approximately ten animals. Three base stations of Sigfox’s low-speed IoT network have been connected to the secure platform using Eutelsat’s smartLNB satellite service that extends terrestrial IoT networks anywhere. The collaboration improved the identification of areas of surveillance and refined allocation of resources for protection on the ground. 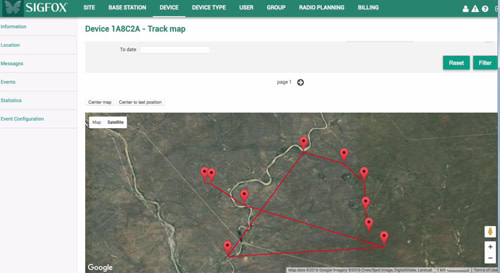 Marion Moreau, President of the Sigfox Foundation: “The partnership agreed between Eutelsat and the Sigfox Foundation for the protection of rhinos is an invaluable opportunity to gain a better understanding of an endangered species and be part of the effort to protect them.Thanks to the support of Eutelsat, we can give rhinos a voice every day, wherever they are.”

Nicolas Baravalle, Director of the Sub-Saharan Africa region at Eutelsat: “We are proud to support the Sigfox Foundation in this critical project for the protection of endangered species in Africa. Through this partnership the use of satellite capacity really comes into its own, enabling us to connect remote points in an environment that will never be served by terrestrial networks.”

This first step will be followed by a monitoring solution for game parks, using sensors that can give a voice to the territory and detect unauthorised intrusions. A team of ten developers-engineers are working closely with a rhinoceros conservation committee in Africa to this end.

About The Sigfox Foundation

The Sigfox Foundation wants to give a voice to vulnerable populations, using the Sigfox network and connected low powered sensors. With the conviction that the “Internet of Things” is detecting weak signals, we deploy in field solutions to prevent from danger, and involve the global Sigfox Ecosystem to protect lives. Sigfox Foundation has secured a team of 45 climate researchers in Antarctica in 2015, and is fully involved since August 2016 to protect endangered wild rhinos in Africa.

Founded in 1977, Eutelsat Communications is one of the world's leading satellite operators. With a global fleet of satellites and associated ground infrastructure, Eutelsat enables clients across Video, Data, Government, Fixed and Mobile Broadband markets to communicate effectively to their customers, irrespective of their location. Over 6,600 television channels operated by leading media groups are broadcast by Eutelsat to one billion viewers equipped for DTH reception or connected to terrestrial networks. Headquartered in Paris, with offices and teleports around the globe, Eutelsat assembles 1,000 men and women from 32 countries who are dedicated to delivering the highest quality of service.