EUTELSAT 172B satellite: on the road to Kourou

Paris, Toulouse, 15 March 2017– The EUTELSAT 172B satellite of Eutelsat Communications (NYSE Euronext Paris: ETL) is in the final stages of preparation at the Airbus Defence and Space facility in Toulouse and will be boarded onto a special flight to French Guiana on 20 March. The 3.5 tonne satellite is scheduled for an Ariane launch on 25 April from the European Spaceport in Kourou. 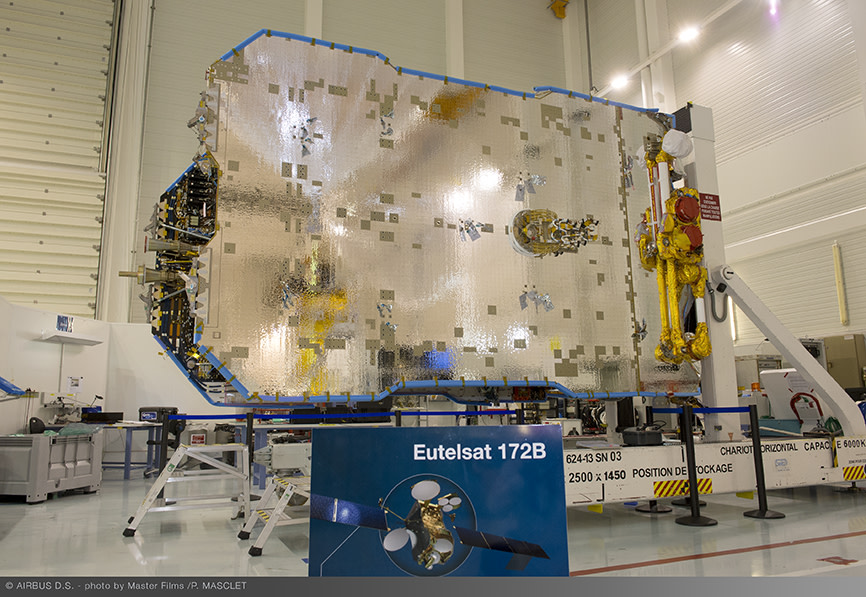 EUTELSAT 172B will deliver increased capacity for fast-growing applications that include in-flight and maritime connectivity, cellular backhaul, corporate networks, video distribution and government services. It will be located at 172° East, a key neighbourhood providing exceptional Asia-Pacific reach over land and sea, from Alaska to Australia. Eutelsat’s new satellite will replace the EUTELSAT 172A satellite to provide service continuity and improved performance via C and Ku-band payloads connected to a range of footprints.

Setting a new benchmark for in-flight connectivity over the Pacific

EUTELSAT 172B will also feature a new Ku-band multi-beam payload delivering 1.8 Gbps of throughput to serve the world’s fastest-growing region for air traffic. The Asia Pacific represents the largest opportunity for in-flight entertainment and connectivity services, with over 8,000 aircraft to be delivered to the region by 2034.

The customised High Throughput payload on EUTELSAT 172B will be a major growth platform for in-flight connectivity, notably Panasonic Avionics Corporation, one of the leading suppliers of in-flight entertainment and connectivity services for commercial airlines. Eleven elliptical spotbeams will enable Panasonic to bridge the West coast of North America to Asia, and down to Australia, supporting rapid air traffic growth in the region and surges in bandwidth use across densely used flight paths.

EUTELSAT 172B satellite will be the first satellite to fly new features and capabilities devised by Europe’s industry.

EUTELSAT 172B is expected to enter service in third quarter 2017, replacing EUTELSAT 172A that will be relocated to another orbital position.